Mike Tyson is my absolute favourite boxer of all time. I’m a fan of boxing, more so back in his times then now and I also enjoy boxing myself. I used to watch boxing back in the day because I wanted to spend time with my brother, he would watch all these sports like Formula One Racing and I did also because I wanted to be with him. It was at its height with these famous heavyweight titans and Mike was the best most dynamic and interesting of all. I remember there was a Tyson fight coming on pay per view which was expensive and people used to get annoyed because they would have to stay up till 4am and watch all these bum 12 rounder fights to get to Mikes fight and he would KO the guy within the first minute. I couldn’t stay up, I was young so my brother said “drink black coffee”, I hated coffee but I drank some, it was disgusting and I still couldn’t stay up, I went to bed and he woke me up at 4am and I still didn’t get up for the fight.

Mike was fascinating because of the exceptional manner in which he boxed, the crazy things he did and said outside and inside of the ring and the absolute controversy surrounding his life. Boxing was at its height and he was the’ baddest man on the planet’. So when his autobiography came out I wanted to read it. I enjoy reading autobiographies, I enjoy reading about people and what life influences developed them to be who they are, what makes them tick and lives of great people, I find them inspiring. I read the 1st page and was hooked I completed it in 2/3 days. It’s a fascinating insight into one of the worlds greatest ever boxers and one of its most controversial figures.

He was the youngest heavyweight champion in the history of boxing and his book opens with him talking about his conviction for rape. It’s interesting, out of all the things that he’s been through and done in his life, he talks about this first. 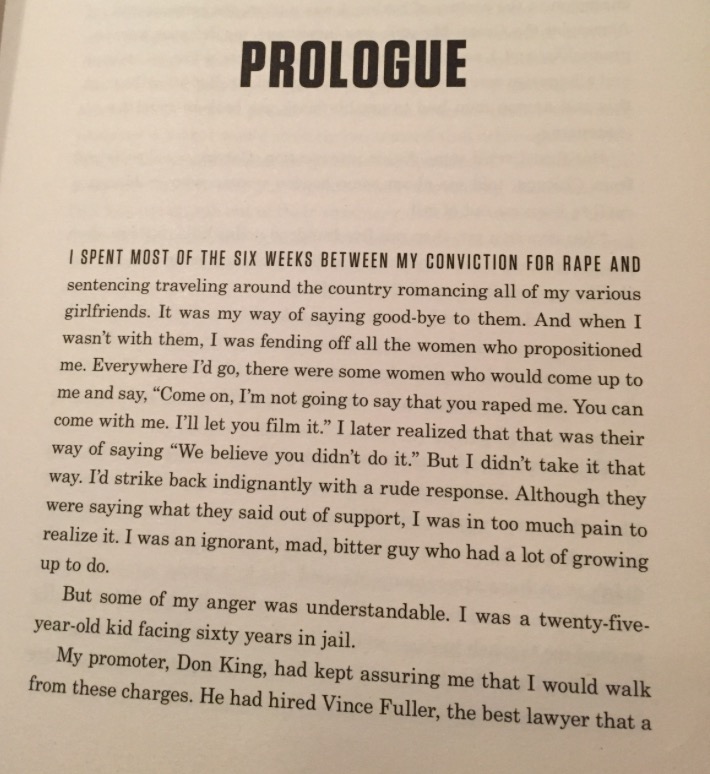 The book starts out with him talking about his tough upbringing in the ghetto of Brooklyn living in poverty, his mother becoming a drunk his father not there, being bullied and robbed and him committing crime and robberies from a very young age. Due to his life of crime he was in and out of different juvenile detention centres. One particular one he went to which was the last, there was an ex boxing champion their teaching the young boys how to box. Mike got involved and the trainer thought he was talented and that he could do something with him. He was introduced to the legendary boxing trainer Cus D’Amto, this would ever forever change his life. Cus believed he could be the best boxer in the world and believed in him whole heartedly. Their relationship was one of Mikes most profound and he talks about it very interestingly in the book. He moved in with him and began his intensive boxing training in his teens.

The book documents the rise of his boxing career and his physical and psychological prowess as a boxer. Cus died before Mike achieved the championship at a young age, which contributes to the unravelling of him over time. He became notoriously famous and all the trappings that came with that. He talks about his infamous marriage with Robin Givens (a woman who was labelled a gold digger and married him for his money and to become more famous). He made a minimum of £300 million in his boxing career and there were people after his money left and right, from Don King to what he would call ambulance chasers, (he could walk into someone by accident and they said he physically assaulted them and take legal action and sue for money) to a number of false rape claims. He had a plethora of women throwing themselves at him the world over and he details this quite a bit.

His life turned into parties, women and drugs, he didn’t care about boxing without Cus and people didn’t really care about him, just his money. He lived a reckless life not really caring about dying and he always seemed like he was so close to death from boxing to crime and having people shooting at him to the amount of drugs he did. He was accused of rape and found guilty by a jury and went to prison. He became Muslim in prison but says ‘he did the right things for the wrong reasons’.

I remember seeing all this but I was young and I didn’t really know details, reading it took me back and it’s interesting reading it from his perspective and not the media painted picture of him.

He talks about other incidents, like the Evander Holyfield ear biting and him poorly managing his money and losing it. His affinity for pigeons to his infamous rants and behaviour and explains why he was doing all that and that he was in a terrible place mentally and emotionally.

I find the book deeply honest and he’s known to be refreshingly honest about himself and his life. The things that pained him, traumatized him, humiliated him, how he was portraying himself due to negative experiences, his depression, at the same time there are some parts which are laugh out loud funny. I find it admirable a man like Mike Tyson can say how weak he feels and how he showed his vulnerability It’s a juxtaposition to his prowess.

The book sums up with him documenting the end of his boxing career and him making positive changes to get away from all these evil vices, counselling, drug rehab and his next chapter in his career, acting. He made the pilgrimage to Makkah for the Hajj, again I seen photos on Twitter but it’s interesting to read about his raw honest opinion about it. He lost a daughter and this seemed to be a pivot of change for him to improve his life and stop his reckless behaviour.

All in all I found the book very enjoyable and fascinating on my favourite boxer of all time. His life has been turbulent from the get go, he’s an interesting man who is actually very learned in the history of boxing he mastered it, he had ridiculous work ethic for it from psychology to manipulation to persona to hours and hours of gruelling training. I didn’t know how intelligent he is from what has been portrayed in the media.

A recommended must read from someone so brutally honest.

May Allah guide Mike Tyson to the straight path and keep him steadfast Ameen.

If you enjoyed the review of his book and are interested in reading it, it can be found at amazon.com and amazon.co.uk

An amazing interview with Mike Tyson talking about the book with some clips from fights.

Jamie Foxx talking about the opening scene of the Mike Tyson movie, I don’t know when or if this movie is coming out, this interview is a year old.